Film / The Heart Is Deceitful Above All Things 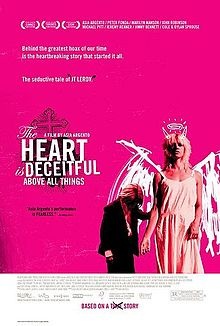 What can we say about The Heart is Deceitful Above All Things? Well, Cole and Dylan Sprouse play Jeremiah, a boy who is taken from his foster parents to live with his drug-addicted, prostitute mother Sarah and along the way has sex with Marilyn Manson, gets raped and molested several times, and at one point becomes a Christian! A very squicky film to say the least.