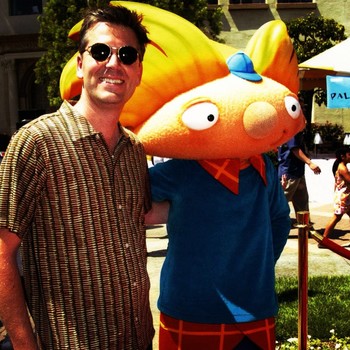 His first job, after graduating from The Evergreen State College in Olympia, Washington, was at Will Vinton Studios in Portland, Oregon, where he learned the art of stop-motion animation, working on movies such as The Adventures of Mark Twain. Bartlett moved to Los Angeles in 1987 to animate the "Penny" cartoons, with assistance from Nick Park for Pee-wee's Playhouse. on CBS. He later made a claymation ID for NBC with Klasky-Csupo. He later worked at BRC Imagination Arts directing projects such as Postcards and Mystery Lodge for Knott's Berry Farm. He was also one of the animators on "Weird Al" Yankovic's claymation Animated Music Video for "Jurassic Park."

During the late 80s and early 90s, Craig created the now-famous football-headed kid know as Arnold, as a clay puppet.

Bartlett's first job at Nickelodeon was story editing the first 65 episodes of Rugrats. He pitched Hey Arnold! to them in fall of 1993, produced a pilot in spring of 1994, and the series was greenlit in January 1995. Nick put him on the final season of The Ren & Stimpy Show while waiting for production on his show to begin.

Hey Arnold was in production continuously from 1995 to 2001, made by Bartlett's own production company, Snee-Oosh, Inc, which he founded in 1986. The series culminated in a TV movie originally titled "Arnold Saves the Neighborhood", which Nickelodeon decided to release theatrically as Hey Arnold! The Movie, in June 2002. Unfortunately, the second planned movie, which was meant to serve as the show's theatrical Grand Finale and tie up all loose ends was cancelled due to the first movie not meeting expectations.

Bartlett then wrote and produced a TV movie for Cartoon Network called Party Wagon (also produced by Snee-Oosh), a story originally intended as a pilot for an ongoing series. The pilot was not picked up, however. During his time at Cartoon Network, he worked with Van Partible on the fourth and final season of Johnny Bravo.

In 2005 Bartlett returned to BRC to make a multimedia simulator attraction for NASA's Kennedy Space Center in Cape Canaveral, Florida, called the Shuttle Launch Experience. In the course of the 3-year project, Bartlett interviewed 26 astronauts to gather their experiences from launch to orbit. One of the astronauts Bartlett interviewed was four-time shuttle flier and commander Charles F. Bolden Jr.

After developing various pilots and feature scripts, Bartlett moved to the Jim Henson Company, where he co-wrote the computer animated film Unstable Fables: 3 Pigs and a Baby. Bartlett stayed at Henson to work as story editor on a PBS Kids preschool show called Sid the Science Kid with PBS executive Linda Simensky, whom he had worked with at Nickelodeon and Cartoon Network.

In September 2008, a show for preschoolers called Jim Henson's Dinosaur Train was picked up by PBS Kids. Produced by Brian Henson, this was the first show created by Bartlett to be picked up since Hey Arnold!. The series debuted on PBS stations on September 7, 2009. Years later, he created another PBS Kids show called Ready Jet Go!, which premiered on February 15, 2016.

But most importantly for 90s kids, Bartlett returned to Nick in 2016 to finally produce Hey Arnold! The Jungle Movie, and put to rest the story he had started 15 years prior. The movie was released on November 24, 2017, and was made possible partly due to fan demand.

Craig is the brother-in-law of The Simpsons creator, Matt Groening, since he is married to Lisa Bartlett, who served as the namesake of the character on Simpsons.