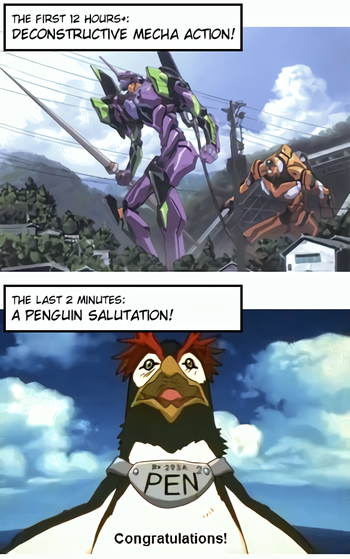 "Is this how you end a series?"

"I wanted controversy, arguments, fights, discussions, people in anger waving fists in my face saying, 'how dare you?'"
— Patrick McGoohan on the intentionally confusing ending he created for The Prisoner (1967)
Advertisement:

A Gainax Ending is an ending that doesn't make any sense, or does make sense but is hidden under enough Mind Screw to not have an easy explanation. This is usually a deliberate form of Mind Screw or intended as a Sequel Hook to a sequel that was never made. If it's not done intentionally, it's often the result of the creators rushing to meet a Cosmic Deadline.

For whatever reason, after watching a Gainax Ending, you won't have any idea what happened. After rewatching it, rewatching the entire series, discussing it with other fans, looking up the meaning of the symbolism, and subjecting the entire thing to a comprehensive literary analysis, you still might not have any idea what happened. If you're lucky, then there will be some kind of emotional or symbolic resolution even if it doesn't actually explain what happened to the characters, and you'll be left with the sense that the series as a whole was more deeply thought out than it seemed before. If you're unlucky, then you'll be left with more questions than when you started and the sense that the series as a whole has been voided of the meaning you once read in it.

A Gainax Ending frequently involves bizarre and nonsensical Genre Shifts, Fauxlosophic Narration, and/or Faux Symbolism, and may very well cause an Audience-Alienating Ending. For an aborted Sequel Hook, you might encounter a Diabolus ex Nihilo (where a new villain appears from nowhere, does something villainous, and then disappears again) or No Ending in the form of an ambiguous Cliffhanger. Either way, it would have been addressed in the sequel... had there been one.

In many cases, a Gainax Ending is merely an attempt to Take a Third Option, rather than resolve a story with a Happy Ending or a Downer Ending; this ending steps out of the narrative entirely and implicates or invites the viewer to make sense of it. From a creator's standpoint, this makes the work, when done right, something that has far reaching consequences rather than merely something seen and consumed and discarded.

The Trope Namer is Studio Gainax, who became associated with this trope after the infamous ending of Neon Genesis Evangelion.

Compare No Ending and Ambiguous Ending, which also contain an at least partial lack of resolution, Trippy Finale Syndrome, which has similar imagery but actually makes sense (it's explicitly a Dream Sequence, a Battle in the Center of the Mind, takes place in Another Dimension, etc), Esoteric Happy Ending, an ending that is considered happy despite all the evidence to the contrary, and Mind Screw (and associated tropes), or a Widget Series, where it's not simply the ending but the work overall that evades explanation. For when the ending ends up changing the entire scenario, see The Ending Changes Everything. Not to be confused with Gainaxing.

And, as a last word for this entry, we'd just like to say that the parrot has been squawking for hours and it is annoying the neighbors, so please feed him his cracker and be done with.

As this is an Ending Trope, expect unmarked major spoilers from here on but don't expect them to make any sense!

note If you don't want to go through several dozens of pages of YouTube comments, they all say "Congratulations". Yes, even Pen Pen.
Feedback