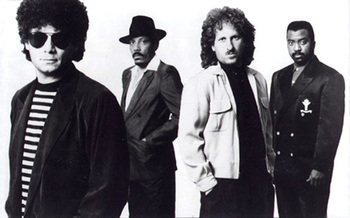 Was (Not Was) is an experimental pop-funk ensemble created by Don Was (Don Fagenson) and David Was (David Weiss), formed in 1979 in Detroit, broken up in 1992, and re-formed in 2004. Don and David Was are, as you might have guessed, not really blood relatives. In the main they're not singers either. While the band has a longstanding front man in "Sweet Pea" Atkinson, they have also passed the lead vocal mic to a series of high profile special guests.

Both Don and David Was are to varying extents sought-after record producers. Don co-produced The B-52s' Cosmic Thing with Nile Rodgers while David produced Songs in the Key of X, two compilation albums spun off from The X Files.