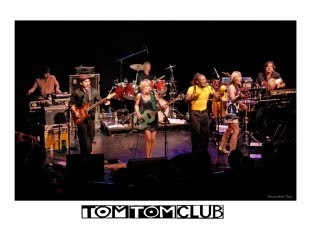 Originally established as a side project, the Tom Tom Club comprise a loose aggregate of musicians, sound engineers and artists of the Compass Point All Stars family, including Tina Weymouth's sisters and guitarist Adrian Belew, the latter of whom toured with Weymouth and Frantz in the expanded version of Talking Heads in 1980 and 1981. They enjoyed early success in the dance club culture of the early 1980s with the hits "Genius of Love" and "Wordy Rappinghood," taken from their self-titled first album released on Sire Records in the US and Island Records elsewhere in 1981.

"Genius of Love" has been sampled or reinterpreted by many artists, including emcee Redman, Funkdoobiest, and Mariah Carey in her hit single "Fantasy." "It's Nasty" (1982) by Grandmaster Flash and the Furious Five was one of the early hip-hop versions of the song. However, the sample was re-recorded by a live band, as was common practice at the time. Another version, "Genius Rap" (1981), by Dr. Jeckyll & Mr. Hyde, was the first cover version.

Tom Tom Club are featured in the Talking Heads concert film Stop Making Sense, where they perform "Genius of Love". This was done during the concerts to allow frontman David Byrne time to change into his famous "Big Suit", and make a grand re-entrance; their number was featured in the finished film for more or less the same reason, much to the dismay of Tina Weymouth.