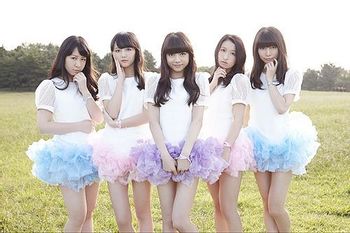 Tokyo Girls' Style (Tokyo Joshi Ru) is a Japanese pop Girl Group of Child Popstars that debuted in 2010 under the avex label, put together due to demand for more Girl Groups. They're known for their rather mature songs and lyrics, which feels dissonant according to their appearances. Of note is the fact that their ages are kept a secret for a wider age appeal (though their ages have been leaked onto the Internet) until their concert at Budoukan in 2012.

To some fans with Nostalgia Filter for avex's former Girl Groups, they bear a striking resemblance to SweetS and are seen as their Spiritual Successors. It may have been intentional on avex's part, and Tokyo Girls' Style did do some Cover Versions of two of their biggest hit singles, as well as practice to their songs prior to their major label debut. Beginning in mid-2015, Tokyo Girls' Style have moved out of the Idol Singer genre and now consider themselves a standard Girl Group.