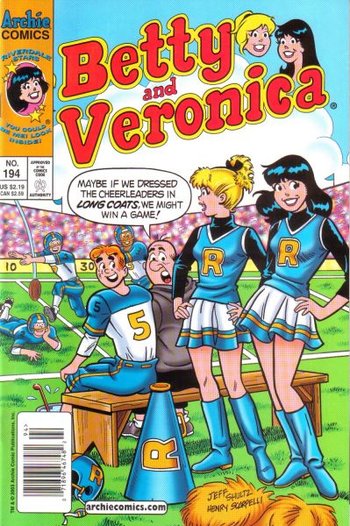 "I'm sexy! I'm cute!
I'm popular to boot!
I'm bitchin'! Great hair!
The boys all want to stare!
I'm wanted! I'm hot!
I'm everything you're not!
I'm pretty! I'm cool!
I dominate this school!
Who am I? Just guess!
Guys wanna touch my chest!
I'm rocking', I smile and many think I'm vile!
I'm flying'! I jump! You can look but don't you hump, whoo!
I'm major! I roar! I swear I'm not a whore!
We cheer and we lead! We act like we're on speed!
Hate us 'cause we're beautiful, well we don't like you either
We're cheerleaders! We! Are! Cheerleaders!"
— The Rancho Carne cheerleading squad, Bring It On
Advertisement:

In almost no movie or TV show from the USA that has one will you find a male character who finds cheerleaders anything other than a turn-on. This, despite the fact that the cheerleaders are almost universally presented as shallow, bitchy and led by the Alpha Bitch.

It might have something to do with the (greater or lesser) element of sexual titillation in many of the cheers, the athleticism they display or their often revealing outfits that expose their midriffs and legs. Besides being a lifesaver for people who hate sports but like girls, a little sexual excitement can boost the transient testosterone of the competitors, or at least remind the crypto-warriors of 'what they're fighting for', as well as who they don't want to be embarrassed in front of...

This is part of the same syndrome that leads to Hollywood Homely. Most American television also banks on the idea their viewing audience may not have gone to college but did go to high school, where cheerleaders were prominent, attractive, and unattainable.

It is worth noting that Reality Is Unrealistic in terms of the girls' outfits. Fictional cheerleaders often perform in uniforms that wouldn't be allowed in a high school. In real life, sleeves are optional (and usually reserved for colder weather), but bellies are covered and skirts are fingertip-length. Not that it really matters, since cheerleaders on screen are usually played by adults anyway.

It should be stressed again that while cheerleaders are universally seen as sexy in American TV and movies it is by no means a certainty that the male lead will end up with them; indeed they will often be depicted as a vindictive Alpha Bitch or shallow Brainless Beauty who will be dumped in favor of a Girl Next Door, Cool Loser, or any array of Hollywood Homely or Endearingly Dorky unpopular girls.

See also Cruel Cheerleader for mean cheerleaders, and Pom-Pom Girl for nice ones.