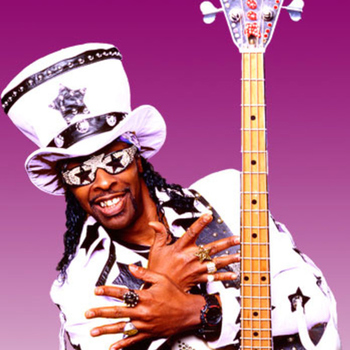 When one mentions P-Funk, two names come to mind. The first is of course Dr. Funkenstien himself. But a very close second is this guy: William Earl Collins, better known to the world of music as Bootsy Collins (born October 26, 1951 in Cincinnati, Ohio).

Along with his brother, the late Catfish Collins, Bootsy got his musical start in the band The Pacemakers, who quickly found themselves the new backing band for James Brown after his original band quit over a dispute in pay. During this time, he had the dubious honor of getting the normally straight edge James Brown high for the first time, when Brown pilfered a drunk that had a very potent strain of crushed-up LSD in it.

After parting ways with Brown, Collins met Clinton 1972. And the character of Bootsy was born. Famous for his gaudy stage outfits, Cool Shades, signature space bass and unique vocal inflections.

In addition to his time with Clinton, Bootsy also fronted his own group, Bootsy's Rubber Band.