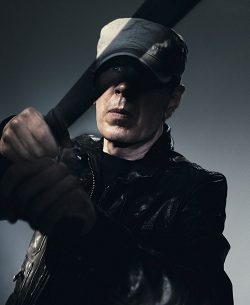 Go seek the lady who will give, not take away.
Naked with stillness, on the edge of dawn she strays.
Night starts to empty, that's when her song begins,
She'll make you happy, she'll take you deep within.
—"Boy Child", 1969
Jesse
are you
listening?
Six feet
of
foetus
flung at
sparrows
in the
sky
— "Jesse", 2006
Advertisement:

He was born in Ohio and the family settled in California. He started out in The '50s as a teenage pop singer, then became a session musician. In The '60s he relocated to London and became the lead singer of a three-man Teen Idol group with fellow singers John Maus and Gary Leeds. This group was called The Walker Brothers, although the members weren't brothers and none of them were really named Walker. They had a string of hit singles including "My Ship Is Coming In", "The Sun Ain't Gonna Shine Anymore" and "Stay With Me Baby", rivaling The Beatles in popularity with British youth. Scott still became dissatisfied with the band's sound, and he made a series of increasingly-strange albums (creatively-titled Scott, Scott 2, Scott 3 and, yes, Scott 4). He developed a love for the music of Jacques Brel, and made several memorable cover versions of Brel's work. Scott 1 through 3 each reached the British Top 5, but his growing experimentation led to the commercial failure of Scott 4.

The Walker Brothers split up in 1968. During the early 1970s Walker made a number of solo albums that skirted into Easy Listening territory; he later admitted he made these because he was in career slump and needed to make a living.

The Walker Brothers briefly reunited in the mid-Seventies and even had a hit single with "No Regrets", but they broke up again soon after. Shortly before their breakup in 1978, the band's label went under and permitted the band to record one last album without any restrictions. This prompted Scott to return to songwriting and record his darkest and most experimental music up to that point. These comprised the first four much-acclaimed tracks to the Walker Brothers album Nite Flights, which went on to influence everyone from David Bowie to Ultravox ("Vienna" can be directly linked to Nite Flights' "The Electrician"). Bowie named Scott Walker as one of his main influences and biggest idol, and nearly went to pieces

when Walker recorded a personal greeting for his 50th birthday.

In 1981, Walker's reputation received an additional boost with the successful release of the tribute album Fire Escape in the Sky: the Godlike Genius of Scott Walker, featuring tracks selected by dedicated Fanboy Julian Cope. Walker's own songwriting had been starting to sound Darker and Edgier and his artistic output, if not his income, began to revive with the critically acclaimed but commercially unsuccessful 1984 album Climate of Hunter.

He didn't release another album until 1995's Tilt, when it became apparent that a full-scale Genre Shift had happened: in place of the sardonic/romantic tone of the '60s and '70s and the ominous electronic balladry of the '80s, Walker was now in Nightmare Fuel territory with massively doomy strings, disturbing Word Salad lyrics and a new, ghostly tenor voice in place of his previous warm baritone. Walker went on to release increasingly disturbing but rather brilliant albums at occasional intervals, his last being 2012's Bish Bosch. Walker also began to make a name for himself scoring the music to avant-garde films, and even recorded an album with drone metallers Sunn O))) which was his final release.

In 1970 he took out British citizenship and moved to England, where he lived for the rest of his life. On receiving an award in 2003, he said of England "I couldn't have made the records I've made in any other place." In 2006 he was the subject of a feature-length documentary by Stephen Kijak entitled Scott Walker: 30 Century Man. On March 25, 2019, Walker passed away at the age of 76.

Not to be confused with the former Republican governor of Wisconsin

His music is featured in the following films:

"Play it cool
And saran wrap all you can"