Film / Seeking a Friend for the End of the World 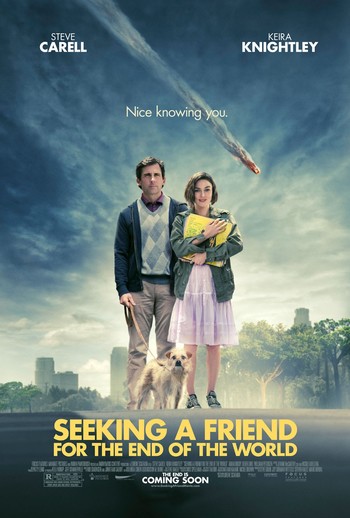 Seeking a Friend for the End of the World is a 2012 apocalyptic drama/romantic comedy film, written and directed by Lorene Scafaria, that is Exactly What It Says on the Tin. As we open, an asteroid 70 miles wide is on a collision course with Earth, and the obligatory shuttle mission attempting to blow it up has just failed. The End of the World as We Know It is in three weeks.

Dodge (Steve Carell) is an insurance salesman whose wife leaves him upon hearing the news, as she doesn't want to spend her last weeks on Earth with a man she doesn't love. Penny (Keira Knightley) is a neighbor Dodge has never spoken to before, who's just broken up with her boyfriend. Dodge barely misses his wife but is heartsick over a high-school love who got away; Penny is furious with herself for missing the last flight back to her family in her native England. Naturally, they team up.