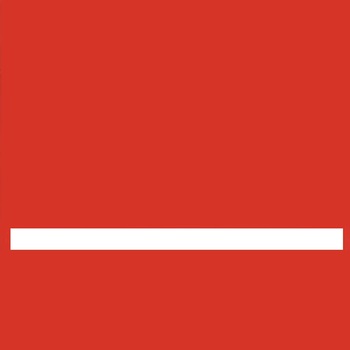 The cover to "Someone Like You" by New Order.
"It's like, how much more black could this be? And the answer is none. None more black."
— Nigel Tufnel on the revised album cover of Smell the Glove, This is Spın̈al Tap.
Advertisement:

Some people think that abstraction is enough to sell, because sometimes the best way to make something stand out is to make it not stand out. Amongst a shelf full of angry pink balls, floating heads, scantily clad women, and outright lies, some classy minimalism can work wonders.

At least one of the things below applies to such covers:

In music, the first really popular record (or at least the earliest notable example) with such a sleeve was The Beatles' eponymous 1968 album (colloquially known today as The White Album for its almost completely blank white cover). However, the mainstreaming of the minimalist design style from the 1980s onward is mostly credited to Peter Saville's work for Factory Records in the 1970s and 1980s, which set the design tone for Post-Punk and much of the eighties (and aughties). He did sleeves for lots of mainstream bands (e.g. Wham!, Roxy Music, Peter Gabriel, Orchestral Manoeuvres in the Dark, Ultravox), but Factory let him do anything he wanted on international hit records by New Order.

Minimalism was pretty much the art style of the 2000s and especially The New '10s, that is, whenever people weren't abusing neoclassicism.

Compare to Face on the Cover, which is usually minimalistic in its approach, but only with faces. Contrast Detail-Hogging Cover and Design Student's Orgasm, which go for the opposite strategy.