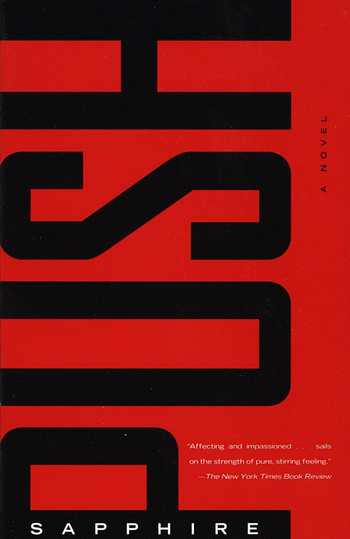 "Some folks has a lot of things around them that shines for other peoples. I think that maybe some of them was in tunnels. And in that tunnel, the only light they had, was inside of them. And then long after they escape that tunnel, they still be shining for everybody else."
—Clareece 'Precious' Jones
Advertisement:

Clareece Jones, aka "Precious," is an obese, illiterate African-American teenager living in Harlem with her parents. As the story opens, Clareece is pregnant with her second child (both the child she has and the child she's pregnant with are products of rape by her father, Carl). Her relationship with her mother Mary, meanwhile, is even worse (mostly physical and verbal abuse, but there are some implications of sexual abuse as well). But things start to look up when she's transferred to a GED program. There, she makes friends with a kind social worker, Mrs. Weiss; a teacher named Ms. Rain; and a few students.

The 2009 movie version, Precious: Based on the novel "Push" by Sapphire, was directed by Lee Daniels and starring Gabourey Sidibe as Precious.

A sequel to the book was published in 2011, called The Kid

Not to be confused with the movie about psychics.

The novel features examples of: