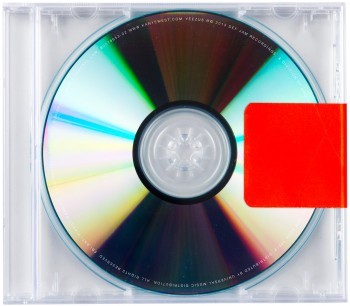 I just talked to Jesus
He said "What up, Yeezus?"
Advertisement:

Yeezus is the sixth album by American rapper Kanye West, released on June 18, 2013.

West gathered a slew of collaborators for production on the album including Daft Punk, Skrillex, Kid Cudi, Chief Keef, OFWGKTA, Travis Scott and RZA, and was influenced by minimalist design and architecture when making the album, reportedly visiting a furniture exhibit at the Louvre multiple times for inspiration. His views on the album were especially perfectionist, and he ended up enlisting the help of Rick Rubin as an executive producer just over two weeks before its due date to strip down its soundscapes.

The end result was a unique musical experience making for some of the most abrasive and eclectic content in a Kanye album yet, incorporating genres such as industrial, dancehall, acid house, electronica, punk, and Chicago drill.

Blood on the tropes: