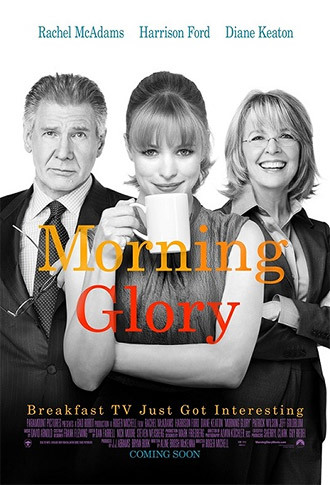 Rachel McAdams was clearly having a tough day.
Advertisement:

You're looking at a movie poster. There's the lineup of the cast, or their floating heads, or their mirrored profiles. You look up at the names of the actors, and much to the annoyance of your inner neat freak, the names listed don't match up with the actors. Why does this happen? Well, there could be a number of reasons. Maybe the text was laid out at a different time than the graphic. Maybe the actor's contracts stipulate whose name goes in which order (and the actor whose name comes first also has to be prominently in the middle of the poster). Maybe it was meant as some sort of joke. It could be that as is the convention for Hollywood posters, the highest paid or top-billed actor is displayed on the poster as the central figure in the image, and all lower-billed actors placed outward; whereas the names of the same actors are arranged in order of prominence from left to right.

There's also a rarer opening titles version, involving the credits not being aligned with the clips being shown, resulting in one actor's name appearing on top of footage of a completely different actor—often to the audience's confusion, if the cast members in question are not familiar names.

See also Diagonal Billing, which can be a cause of this trope if it's employed on the poster as well as in the credits.