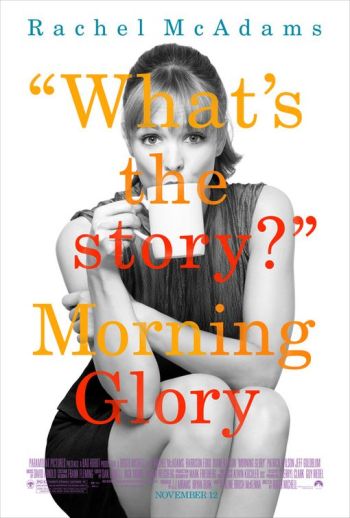 For some reason, guys like the film, too. (It's probably the Oasis Shout-Out.)
Advertisement:

At the start of the film, Becky Fuller (McAdams) is fired from her job as the producer of a morning television talk show in New Jersey. She takes a pay cut to work for a different morning show called Daybreaknote Not to be confused with the similar British morning show of the same name and status at that time on the fictional IBS network in New York. Daybreak has terrible ratings and is headed for cancellation unless Becky, and the oddball employees that work for her, can make the program a success. She also ends up in a relationship with another producer (Wilson), but her workaholic attitude is constantly preventing her from having any sort of a normal life.

The main focus of the movie is Becky's relationship with one of her favorite news broadcasters (Ford), who has been forced to work on her cheery morning show even though he is accustomed to hard-hitting journalism. He begrudges the assignment and plays the part of the cranky old man who drives Becky up the wall with his antics and general grumpy attitude.

The film opened to positive reviews and moderate success.

Co-produced by J. J. Abrams, of all people. Not to be confused with the 1933 Katharine Hepburn film of the same name.