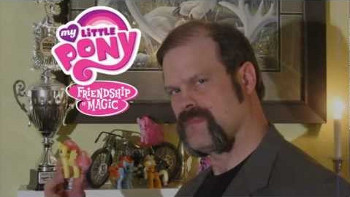 The Spear Counterpart to the Estrogen Brigade, the Testosterone Brigade is an enclave of male fans within a traditionally female-dominated (or at least gender-neutral) fandom. While they may dislike the frequency of the Female Gaze or the presence of Mr. Fanservice characters, it's very likely that they were pulled into the series in the first place because of one or more female characters they find pleasing to the eye. Depending on the series, they may view it as a Guilty Pleasure due to the number of female fans. Occasionally, as with an Estrogen Brigade, both sides will butt heads over largely superficial issues, with buckets of opposite-sex awkwardness, which can get defensive. It should also be noted that not all male fans within such a fandom are necessarily of the Testosterone Brigade.

A Testosterone Brigade is easily attracted by hints of Les Yay or by fanservice from main characters. See also Multiple Demographic Appeal, Guilty Pleasure, Best Known for the Fanservice. When the creators of a work acknowledge this demographic and make a "girly" show that's actually aimed at men, then you've got a Jiggle Show or the trope What Do You Mean, It's Not for Little Girls?.