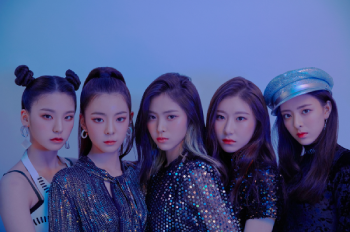 ITZY (Korean: 있지) is a five-member South Korean Girl Group. They debuted on February 12th, 2019, with inaugural title song "Dalla Dalla". It proved immensely popular and made ITZY the very first Korean Girl Group to earn a Platinum certification in Korea for their debut song.*  Streaming variant: this means "Dalla Dalla" had at least 100,000,000 legal streams in its first year. The group initially drew attention for being "different" from the usual JYPE formula, which later proved to be part of the group's debut concept "it's okay to be different".

They were JYP Entertainment's first girl group to debut since TWICE over three years earlier (October 2015) and its last until NMIXX debuted three years later (February 2022). As all ITZY's members were born in 2000 or later, it is considered to be one of K-Pop's "Fourth Generation" groups.

Like TWICE before them, they eventually moved into the Japanese market in 2021, releasing their first Japanese EP What'z ITZY (their first five Korean title tracks) digitally that September, followed by a physical release compiling Japanese versions of those tracks plus "LOCO" with their original Korean versions (not unlike the #TWICE series) in December. This was followed up in April 2022 with ITZY's first Japan-only single, "Voltage".

The members are, in order of descending age (the standard way JYPE lists its group members):

Tropes related to ITZY and their music: