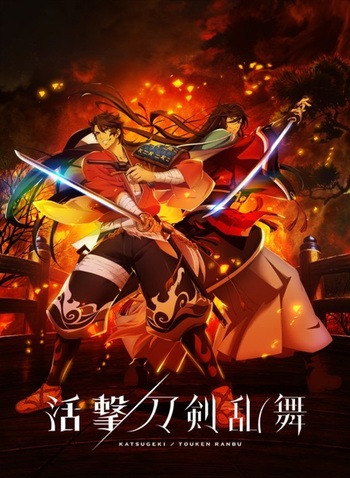 The year is 1863. As the tumultuous samurai era is coming to an end, Japan is split between the pro-shogunate and anti-shogunate factions. The fate of the world is threatened as an army of historical revisionists are sent from the future to alter the course of history. In order to bring these forces down and protect the real history, two sword warriors, spirits who are swords brought to life by a Saniwa, rush to Edo. The polite and thoughtful Horikawa Kunihiro and the short tempered yet skillful Izuminokami Kanesada, who served the same master, confront the invading army along with a lively gang of other warriors including Mutsunokami Yoshiyuki, Yagen Toushirou, Tonbokiri, and Tsurumaru Kuninaga.

As the fate of history lies in these heroes' hands, what meets the blade is yet to be uncovered...

Katsugeki/Touken Ranbu (活撃/刀剣乱舞, lit. "Action Picture/Touken Ranbu") is ufotable's action-packed take on the wildly popular browser game Touken Ranbu. It serves as the second half of the dual anime project announced in 2015, the first half being 2016's Touken Ranbu - Hanamaru. The series premiered on July 1st, 2017 as part of the Summer 2017 lineup.

As of September 23, 2017, ufotable announced the series will receive a film adaptation and is currently in process

after the anime's conclusion. The movie has since had no updates on ufotable's end until 2021, where they released a teaser trailer

for the film. Currently there is no planned release date.

). Elsewhere in the English-speaking world, Madman Entertainment distributes the anime in Australia and New Zealand.