What Do You Mean, It's Not for Little Girls? 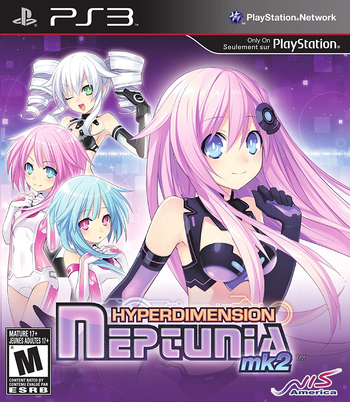 Rated M for "My Daughter?"
YouTube user: Is this a children's show? If so, why is there a picture of girl mounting another girl lying on the floor?
Uploader: It's NOT a children show.
— Comments on the opening to Hidamari Sketchnote For the record, it technically isn't, but it doesn't have much in the way of family-unfriendly content.
Advertisement:

So you find a new show and it has an all-female cast, lots of pastel colors, and improbably high levels of cuteness. And you think "this would be a perfect show for my eight-year-old sister."

And then you discover that the show airs at three AM and has a fandom that's mostly 16 to 40 year-old males. After the initial shock is over you start to wonder why any man would even consider watching a show like this, or why your male buds that like it even have such interests in a series about feminine shenanigans or are invested in flowery romance between girls that can't even express attraction to guys. Alternatively, you might be a woman or girl wondering why this series you and your fellows enjoy wasn't even primarily made for them, as it would have all the trappings of a perfect girls' show. Or, you might even be a lesbian yourself wondering why this perfect Yuri Genre show was made for the opposite older straight male demographic.

That's not to say that such shows necessarily contain things that would be inappropriate for your little sister, it's just that they're not specifically intended for little girls to watch. Some of these shows do manage a female fanbase on the side. Relatedly, entertainment actually targeted to young girls, especially in the field of music, has become increasingly sexualized, blurring the lines further. The classic examples are idol singers and girl groups such as Britney Spears, the Spice Girls, and Destiny's Child (While Korean Pop Music is much less sexualized, it is still intended for older girls instead of young girls). Just take a look at any Toddlers & Tiaras-type show.

On works with cast of other side of gender spectrum, sometimes female-oriented works with Bishōnen characters and bright and flowery setting can be confused as Shōjo genre works for young girls, where in reality, some of these works are classed as either Josei or Boys' Love made for adult female (or male, in case of Boys' Love) audiences. Even an Otome Game that has all the trappings of content for younger girls can make you wonder why are they made for older female demographic.

A subtrope of What Do You Mean, It's Not for Kids?. Not to be confused with a Subverted Kids' Show, which is meant to horrify, or a show that is for little girls but also has an older male fanbase.

See also Moe, Boys' Love Genre, Josei, Girl-Show Ghetto, Testosterone Brigade and Values Dissonance. Can be a problem if a Moral Guardian shows this to a child and it's a Yuri Genre show. Compare with Multiple Demographic Appeal.

Again, note that all that is actually required for this trope is that the work is aimed at an older and/or male or unisex audience, not that it has any overt child-unfriendly content.