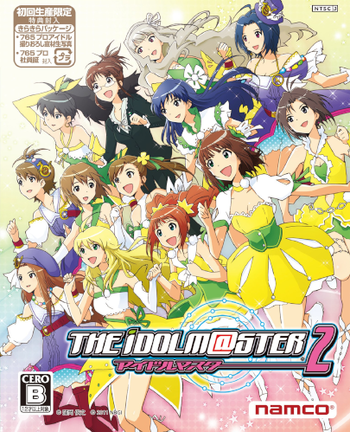 The iDOLM@STER 2 is the fourth game in the The iDOLM@STER franchise, the second in the 2nd VISION line of the 765 branch, and the most well known worldwide, not because it has an English version (like most others products of the franchise, it's only sold in Japan) but since it was ported for the PlayStation 3, allowed for more easy access, because, contrary to the Xbox 360, the PS3 version isn't region locked to Japan and Asian consoles.

The game features updated graphics, new music, costumes and accessories, aside from bringing back several of the ones from the other games.

The game actually takes part in an Alternate Continuity from the other games (with the exception of Dearly Stars) where the Idols made their debut six months before the start of the game but are struggling to make their mark on the industry. That was until Ritsuko got permission to lead an ambitious project: Ryuugu Komachi, a three-girl idol group where the strengths of each girl cover the weaknesses of their team-mates.

The strategy becomes a great success, and the President of 765 Productions decides to hire a second Producer (the Player Character) in order to form another three-girl group. Not only must the Producer deal with managing three girls at the same time, but figure out how to surpass their main competition: Ryuugu Komachi, and (later on) a group of three male idols called "Jupiter".

Moreover, all of the girls backstories and some of their visuals were changed, in some cases radically. To name a few, Takane and Hibiki never worked for 961 Pro, and were part of the 765 Pro office from the beginning. Mami, like in the first game, used to be a Tag Team Twin but isn't anymore, and let her hair grow to differentiate herself even more from her sister. Miki's natural hair color is blonde, not dyed. Yukiho's voice actress changed, among other changes revealed in their storylines.

On top of that, since Ritsuko created the Ryuugu Komachi, Iori, Ami, Azusa and herself are not available for normal production, like the other girls. They are set up as your first rival in the game.

The gameplay also gets several changes. Instead of trying to build up one Idol's career, you focus on building an impressive team of three. This places much greater emphasis on teamwork and unit cohesion. The old tension of an individual idol doesn't play much of a part anymore, but the mood of the Unit as a whole has to be taken care of. There's only three types of lessons now, one for each stat, instead of five. The stage performance mechanics are also changed. There are no more stars to be aware of, instead there are the appeals multipliers.

The Anime of the Game The iDOLM@STER was mostly based around The iDOLM@STER 2, but it tweaked a lot the backstories and storylines, so who watched the anime, isn't spoiled (mostly) to the story of the game, and vice-versa. Several manga were also based on the game; Colorful Days, which is set before the game, and The World Is All One, which explores a possible game scenario if Haruka, Hibiki, and Yukiho were a unit together.

For the history of the franchise and the other games, go to the Franchise page. For Tropes that are common to all 765 games, please keep it to its own page.