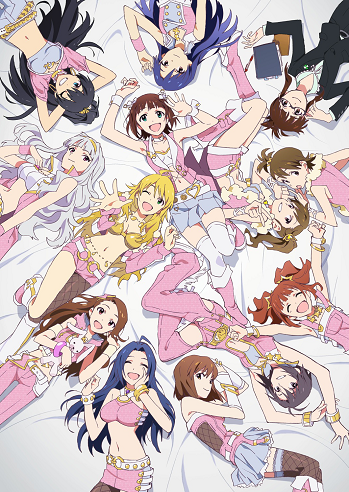 ARE YOU READY!! I’M L@DY!!
Advertisement:

The iDOLM@STER is the second TV series based on the video game series of the same name. It was produced by A-1 Pictures and aired through the summer and Fall of 2011.

The anime follows the exploits of an unnamed rookie Producer starting work at 765 Productions, a struggling talent company that manages Idol Singers. He immediately gets thrown in at the deep end by being assigned twelve aspiring idols, each with their own particular talents, personalities and ambitions. It will be a long and tough road to stardom, but by spending time with his charges and bonding with them, the Producer stands the best chance of learning what makes each girl tick and where their strengths truly lie.

The series wrapped up in 2013 with a movie, Beyond the Brilliant Future!, which covers them gearing up for their largest performance yet while dealing with newbie backup dancers. A novel was written to bridge the time between the show and the movie.

In 2017, a prequel manga set in the anime's continuity started seeing serialization. Ayasake no Koganeiro: THE iDOLM@STER takes a much needed look into the backstories of President Takagi, Kuroi, and Kotori. The manga ran in Comic REX from 2012 to 2016.

For a time, the entire series was legally available to watch on Crunchyroll

For the history of the original game and the franchise, see The iDOLM@STER.