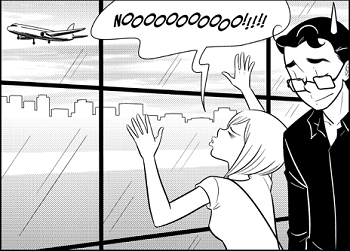 With added bonus Big "NO!".
"Daniel is traveling tonight on a plane
I can see the red tail lights heading for Spain
Oh and, I can see Daniel waving goodbye
God it looks like Daniel
Must be the clouds in my eyes"
— Elton John, "Daniel"
Advertisement:

Characters standing outside an airport always know exactly which plane has their beloved on it, even if they lost a Race for Your Love. Planes take off from airports every few minutes, but characters psychically know which one is theirs.

If there's a POV shot from the ground, you'll see the face through the window, rather than a more accurate view that looks approximately like a small dot in the sky. (Fridge Logic dictates that even if the plane were close enough to see in the window, you'd have to be right under it.)

Bonus points if they wave to each other through the window or something. See also Airplane of Love. Could be justified if it's a very small airport, but not likely if it's any kind of large passenger plane.