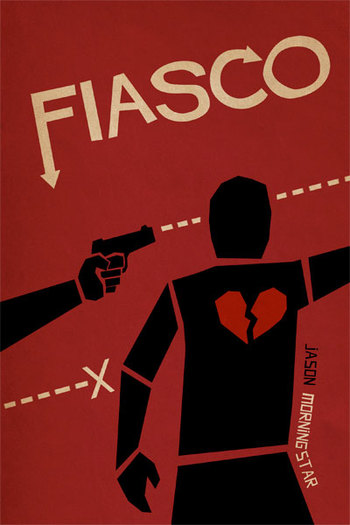 This probably doesn't include death because death would be way better than whatever this is.
THINGS CAN GO WRONG, FAST...
Maybe some dude from youth group talked you into boosting a case of motor oil, but now your cousin is dead in a swamp and you killed him. Maybe you and your girlfriend figured you could scare your wife into a divorce, but things went pear-shaped and now a gang of cranked-up Mexicans with latex gloves and a pit bull are looking for you. It seemed like such a good idea at the time.
Advertisement:

most often and easily described as "The Coen Brothers RPG". Other illustrative comparisons are films like A Simple Plan or Lock, Stock & Two Smoking Barrels, the common thread being small-time capers from ordinary people with big dreams getting out of their depth in criminality and over their heads in trouble, lies and death. If you're lucky, your character will end up back where they started with only the benefit of painfully gained wisdom.

It's notable in part for two reasons: first of all, it is a simple-to-run, no-prep, no-Game Master system which will produce a stand-alone story. The second is that it is a perfect tool for setting up a perfect storm of Gambit Pileups, Magnificent Bastardry, and sheer incompetence, where you won't know the fools from the pros until the end of the game.

Instead of using an Honest Rolls Character or a Point Build System or even crafting a character you want to guide to victory at all, the characters are defined by their driving needs and relationships to each other, chosen from tables in the playset and then set off to collide. A whole bunch of dice are rolled first and then used for this setup (and in the Tilt and Aftermath tables), but then it's all roleplaying. The player in the spotlight plays out a scene and chooses to Establish (set the scene) or Resolve (choose success or failure), with everyone else collectively making the other decision. It's expected that no-one will cover themselves in glory, and if your character's ignominious death is the best turn for the story, embrace it. (They can still appear in flashbacks and such.)

The book comes with four basic settings, or "Playsets": "Main Street" (small town USA), "Boom Town" (a mining town in The Wild West), "Tales From Suburbia" (American Suburbia) , and "The Ice" (in and around McMurdo Station in Antarctica); dozens more are available on Bully Pulpit's website

, and they recommend a Playset of the Month

Tropes possibly encountered during games include:

Settings included in playsets (not nearly a complete list):