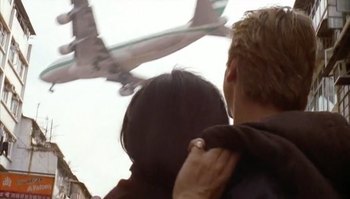 Ah, love. Sometimes — and in Shōjo series, very frequently — it's one-sided. When a character encounters that certain special someone who's totally out of their reach, a conveniently timed airplane flies by, and the unrequited lover spends several seconds staring at the airplane as it flies off into the distance, forever out of reach. In fantasy or historical series where there are no airplanes, a bird appears instead.

Despite flying high in the upper troposphere, the Airplane of Love frequently draws a Dramatic Wind in its wake that affects people on the ground.

See also Train-Station Goodbye. If the certain someone is on the plane, expect Air Voyance.