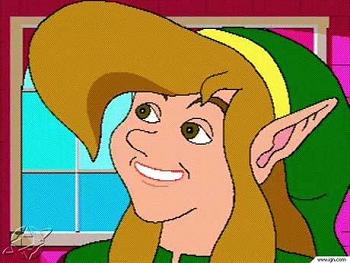 "I just wonder what Ganon's up to"... and then everything goes to hell.
I laughed, I cried, I went POO POO!
— Scratch, "One More Final: I Need You(tube Poop)"
Advertisement:

moniker, is one of the most notable YouTube Poop-ers, often hailed as potentially the best during his heyday (in the genre's golden age), along with Deepercutt (the two were considered by various fans as singular rivals for a long time).

He rose to further fame when his account got suspended by Colgate-Palmolive because of his nasty Alternate Character Interpretation of the company's mascot, the anthropomorphic hare dentist Dr. Rabbit, only for him to come back with even more Dr. Rabbit-centered poops as a response.

Unfortunately, not long after Colgate realized they shouldn't be so strict about the (mis)treatment of their "beloved" mascot, Walrusguy was hacked by anonymous hater(s), resulting in his account being closed. He did return, but with all of his videos gone, and a message that he would quit making poops. His final work, "One More Final: I need You(tube Poop)", is a truly gut-wrenching farewell to the entire world of YouTube Poop.

The WalrusGuy account still existed by 2011, but was mostly devoted to posting random stuff that wouldn't fit on Walstrom's other page, NAveryW, shifting focus to his own Web Animation/Webcomic series called Enthalpy... until he came back to the game, that is. After nearly two years of inactivity, he released An Unimportant Announcement

, and despite being released on April first, he then came out with three more a month later, and since then has released them at slow but definitely certain updates. Gwonam's Gweat Adventuwe, for example, is also his longest poop at nearly ten minutes of sentence-mixing majesty.

However, despite the fact that WalrusGuy's formerly uploaded Poops aren't on his account anymore, FEAR NOT! A particularly dedicated fan of his created an account, called WalrusGuy Archive

, in order to re-upload said lost poops, thus allowing new generations of poopers to have an example to use as a basis for their work. And unlike what happened with fellow former Pooper I Am The Gang - who doesn't even want his own, old poops to be re-uploaded again (not that other users such as IAmThaGang or ImTheGang care) - Walstrom himself approves of the new channel.

Walrusguy uses the following tropes in his works: