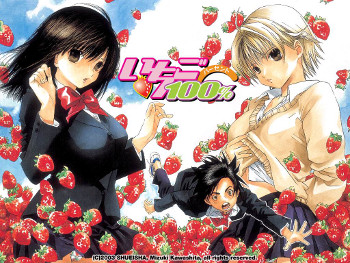 Junpei Manaka is on the cusp of high school, and he's obsessed with only one thing: movies. He has dreams of becoming a director one day, and often goes out and daydreams of the movies he wants to make on the roof of the school.

One day while going there, though, he catches a glimpse of a beautiful girl... and her strawberry-print panties. For the first time in Junpei's life, he notices the opposite sex. It also helps that the mystery girl left behind a notebook, filled with a story that Junpei can't put down (and would make, in his opinion, a great movie). Obsessed with this mystery girl, he isn't sure where to turn... shy bookworm Aya Tojo, whose name is in the notebook, or confident school beauty Tsukasa Nishino, who outright told him she was wearing strawberry-print panties. Of course, other girls eventually start showing interest in Junpei...

By manga artist Mizuki Kawashita, it ran from 2002 to 2005 in Weekly Shonen Jump. It was adapted to anime in 2005, and has appeared in Jump Super Stars and its sequel (despite being a slice-of-life high school romance). One thing that makes the series interesting is the fact that the series itself makes it unclear who the main character will end up with, despite the assumptions one would make about this sort of series. This resulted in much uproar when the main character finally made a choice.

In 2017, Aya finally got a spinoff of her own, titled Strawberry 100%: East Side Story, detailing what happened to her a couple of years after the penultimate chapters, but before the epilogue.