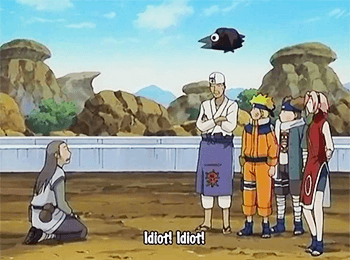 When a boke (silly or idiotic character) says something stupid or foolish, one or more crows may be seen flying past, crying "aho! aho!" or "ba-ka, ba-ka". Aho is Japanese onomatopoeia for a crow's call and the kansai-ben equivalent to the all-purpose insult baka (one functional translation of aho is "idiot"); kansai-ben is used by both the Boke and Tsukkomi Routine and The Idiot from Osaka.

Much more common in comedy series than serious dramatic anime, but sometimes found at lighter moments in serious series, too. A rough equivalent Western Animation is the braying of a donkey/jackass, though it's never been quite as universal.

Not to be confused with a particular nuclear powered raven who is an idiot or the idiocy of Crow T. Robot. It's not an inversion of Clever Crows, either.