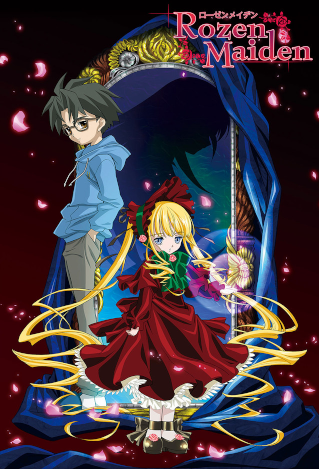 "I am Shinku — the fifth doll of the Rozen Maiden."
"Know that when we meet again, I will turn you into junk! I'll rip you into so many pieces, you'll never be able to return!"
—Suigintou, towards Shinku.
Advertisement:

Jun Sakurada is a boy with a trauma in his past and a strange hobby: He collects supposedly cursed items in the hope that one of them will actually turn out to be cursed. One day, he receives a letter which simply says, "Will you wind? Yes / No". Responding in the affirmative, he sticks the letter in his desk drawer and thinks nothing more of it until an ornate case arrives with a beautiful clockwork doll inside. True to his word, Jun does wind, which causes the doll to become animated.

The original anime series continued into a second season, called Rozen Maiden: Träumend. Season one's Big Bad, Suigintou, is supplanted by a new doll named Barasuishou, and it seems as if the mysterious Rozen, father of the Rozen Maiden, has finally appeared.

The OVA, Rozen Maiden Ouverture, focuses on Suigintou's Backstory, and shows that Shinku wasn't as good a sister as she'd like to think.

Sadly, it was never finished because of a dispute between the producers and publishers of the manga.