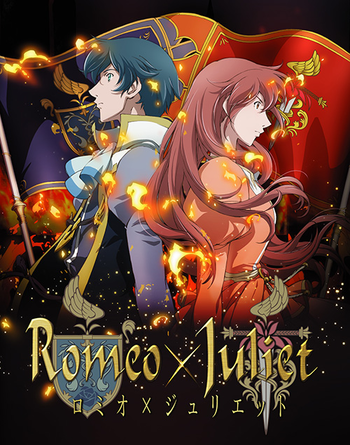 Is this truly a love that can never be?

It Was a Dark and Stormy Night when Lord Leontes Van de Montague staged a bloody coup against the rulers of Neo Verona, slaughtering each and every member of House Capulet. Only one survives: Prince Capulet's youngest daughter, two-year-old Juliet Fiammata Ars De Capulet, who was spirited away by the captain of the guard and the few retainers that lived.

Fourteen years later, Montague rules over Neo Verona as its tyrannical prince, and the surviving Capulet retainers live in hiding beneath a theater run by a sympathetic playwright named William. To remain hidden from Montague, Juliet has been disguised as a boy her whole life and kept in the dark about her true heritage, until the day she turns sixteen. Nevertheless feeling a strong sense of justice, she sneaks out whenever she can to fight against the oppressive Montague regime as the Red Whirlwind, a Zorro-esque vigilante.

As Juliet's sixteenth birthday draws near, she gets into a scrape while acting as the Red Whirlwind and is saved by Romeo Candore Van de Montague, the idealistic son of the prince. The two instantly feel a connection, and can't seem to help crossing paths again and again.

Romeo X Juliet is loosely based on William Shakespeare's famous play Romeo and Juliet. The series also draws a bit on other William Shakespeare plays for both character names and plot elements. The cross-dressing and disguises, and a play within the play that matters to the plot.

Not to be confused with other adaptations of Romeo and Juliet, especially another one that also uses a mathematical symbol, William Shakespeare's Romeo + Juliet.

This anime is available legally in the U.S. streaming on Funimation's Video Portal

The examples below contain unmarked spoilers for plot points that are carried over from the original play.