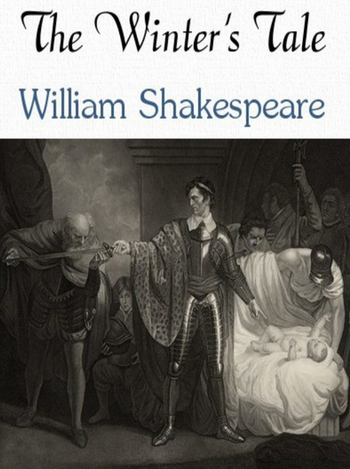 The Winter's Tale is a tragicomedy (or romance, depending on your point of view) by William Shakespeare.

The plot is thus: King Leontes of Sicilia unreasonably suspects his wife, Hermione, of having an affair with his best friend, King Polixenes of Bohemia. Believing his newborn daughter Perdita is illegitimate, he sends Hermione to prison and orders his manservant Antigonus to abandon Perdita in the wilderness. Hermione pleads for reason, to no avail.

Leontes' other child, prince Mamillius, dies because he has been separated from his mother, and soon after, Hermione dies as well. Leontes realizes his error, and decides to grieve his family for the rest of his life. Meanwhile, Antigonus bemoans his job, but leaves the infant Perdita in a wild area of Bohemia, before being devoured by a bear. A shepherd and his son find the baby and resolve to care for her.

Flashforward sixteen years! Time itself comes onstage to tell the audience that Florizel, Polixenes's son, has fallen for Perdita (who knows nothing of her royal heritage). His father is none-too-pleased and decides to spy on them at a sheep-shearing festival. Florizel, after being confronted by his father, flees with Perdita to Sicilia, and everyone (including Lovable Rogue Autolycus) pursues. There, Perdita's heritage is revealed. Father and daughter reunite, just as a statue of Hermione is brought onstage. Amazingly, the statue comes to life, and so the happy family is together once more. note Except Mamillius, he kinda gets screwed. Autolycus becomes the servant of Perdita's foster father, and all loose ends are tied up nicely.

It is believed to be one of Shakespeare's last plays; although there is no firm evidence as to when it was first staged, the earliest references to performances of The Winter's Tale date to 1611. The play is famous for a number of things: the vast difference in tone between the first part, which plays out like a tragedy, and the second part, which is more of a pastoral comedy; the Maybe Magic, Maybe Mundane scene at the end, where Hermione's statue comes to life; the name Hermione, which became famous in a certain book series; and of course, the iconic stage direction Exit, Pursued by a Bear, proof that even Shakespeare knew Bears Are Bad News.

Don't confuse it with the 1983 novel Winter's Tale and its 2014 film adaptation, or with the 1992 French film A Tale of Winter (which has a big Shout-Out to this play).

Tropes in The Winter's Tale: