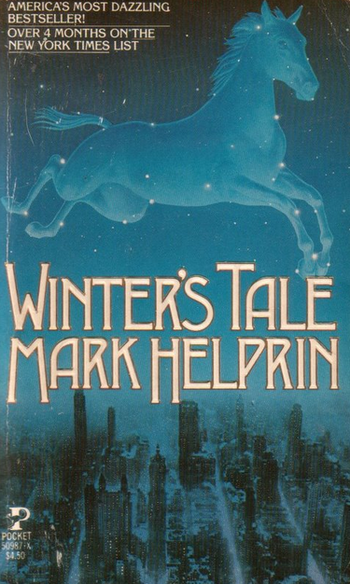 Winter's Tale (alternatively titled A New York Winter's Tale in the UK and some other markets) is a 1983 novel by Mark Helprin. It's usually described as belonging to the school of Magic Realism, incorporating elements of fantasy, romance, and historical fiction. It follows a burglar named Peter Lake, who meets a dying young woman, Beverly, when robbing her father's fortress-like home in New York in The Edwardian Era, and his subsequent efforts to save her life, which end up having unexpected results decades down the line.
Advertisement:

The Film of the Book was released on Valentine's Day in 2014, starring Colin Farrell as Peter Lake, Jessica Brown Findlay as Beverly Penn, and Russell Crowe as Pearly Soames.

Not to be confused with the play The Winter's Tale by William Shakespeare, or with the 1992 French film A Tale of Winter.

Tropes in both the book and the film:

Tropes in the book: