Film / A Tale of Winter 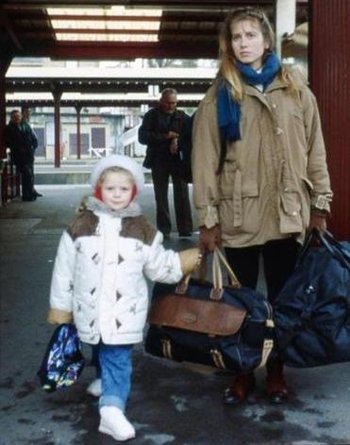 A Tale of Winter (French: Conte d'hiver) is 1992 French film written and directed by Éric Rohmer. It's the second of his Tales of the Four Seasons.

Félicie (Charlotte Véry) has a fling with hunky chef Charles (Frédéric van den Driessche) on a summer holiday before heading off to Paris. She gives him her address, hopeful that they can continue their romance, but he never writes her back. Five years later, she's living with her mother (Christiane Desbois) and raising Elise (Ava Loraschi), the daughter that Charles unknowingly fathered. Félicie is involved in a Love Triangle with Maxence (Michel Voletti), the owner of the hair salon where she works, and Loïc (Hervé Furic), a librarian who befriended her when she moved to Paris. But she still carries a torch for Charles, especially once she realized he never wrote her because she mistakenly wrote down the wrong town name on the address slip she gave him.

In the final two weeks of December, Félicie's life takes her on a rollercoaster ride that forces her to examine her values and relationships with the men in her life. But as a new year approaches, Félicie experiences one final fateful twist.

Not to be confused with the play The Winter's Tale by William Shakespeare (though a performance of said play is part of the storyline), or with Winter's Tale novel from 1983, and its 2014 film adaptation.