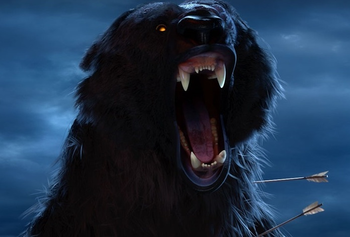 Absolutely not a bear you'd want to cuddle with.
"Just so you know... I don't feel mercy or sympathy. Cuz I'm a bear, after all."
— Monokuma, Danganronpa 2: Goodbye Despair
Advertisement:

Just as monkeys and penguins are used to make something funnier or cuter, bears have a knack for scaring the crap out of everyone. Polar and brown bears are the largest extant land-based predators in the world, with a penchant for aggressive behavior, so it's easy to see why.note Polar bears, the largest of bear species, can weigh up to 1500 pounds (680 kg) and have been known to hunt walruses and beluga whales. Because of this, throwing a bear into a scene is the best way to let the audience know that our heroes have gone beyond rock bottom and are now totally screwed.

For animals that tend to get a similar treatment, see Savage Wolves, Cruel Elephant, Rhino Rampage, Maniac Monkeys (and Killer Gorilla), Threatening Shark, and Reptiles Are Abhorrent (and Never Smile at a Crocodile). Often a Super-Trope to Fighting Panda, for when pandas are portrayed as martial artists capable of kicking ass. Contrast Beary Friendly and Beary Funny where bears aren't bad news.