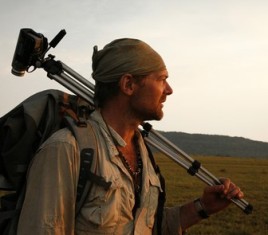 The Survivorman, pictured here in his natural environment.
Advertisement:

Survivorman is a Discovery Channel show in which famed survivalist Les Stroud runs the audience through techniques and strategies to keep yourself alive when lost and lonely in the wilderness. The series itself has gone through several series revivals over the years, with a 2015 revival currently running on the Science Channel.

Survivorman can easily be summed up as the survival show, along-side Man vs. Wild, of which the two were rather famous, and infamous, for being Dueling Shows, though with the odd distinction of being on the same network at the time of their creation; the reason being that new episodes of one can be shown during the off-season of the other, so you can get double your survival training during the year.

Unlike Bear Grylls, however, Stroud works alone, filming himself surviving in the wilderness for one week without the aid of a crew. As a result some might find Survivorman a bit more Boring, but Practical when compared to Man vs. Wild, but by most accounts it's the more accurate and realistic of the two though some have criticised this choice since it means Les usually has to do double the work when it comes to getting shots like climbing a mountain while the camera is still below him. Due to concerns for his health Les Stroud has cancelled the show a couple times, but then Un-Cancelled it. This owes a lot to the fact Stroud does not take breaks in hotels overnight- he stays put in the wilderness and heavily risks his safety. His exploits can get quite brutal at times. As of 2014 the show is back with a 5th season after a two year hiatus; in 2012 it returned after a four-year hiatus.