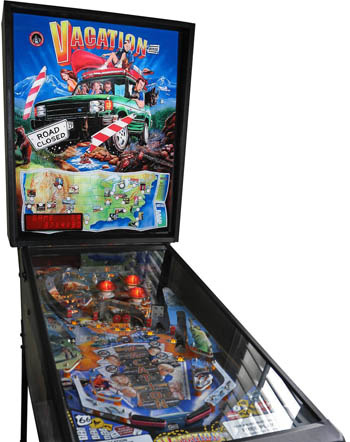 The Griswolds star in: the worst pinball game ever made?
Arcade Pinball For The Home!
— Advertising flyer
Advertisement:

At the start of the Turn of the Millennium, Doug Duba of Churchill Cabinetnote a company that makes cabinets for arcade games, pinball machines, foosball and air hockey tables, and other such games noticed an interesting phenomenon — their consumer customers, many of whom collected vintage Pinball machines, were asking about the feasibility of making an original pinball game inexpensively priced for the home market. His interest piqued, Duba contacted his industry sources about creating an arcade-caliber pinball table that could be sold for substantially less than a commercial machine, yet hold its own in quality and player appeal.

The result of this effort was Vacation America, a Physical Pinball Table released in 2003 by Duba's Chicago Gaming. Designed by arcade veterans John Trudeau and Steve Kordek, and illustrated by Paul Faris, this is a game about a family traveling across the United States. Pile everyone into the station wagon, then drive through the Super Loop to go from the Florida Everglades and Washington D.C. to Mount Rushmore, San Antonio, the Grand Canyon, and Hollywood. Consult the Map to increase the score multiplier, complete the routes to start multiball, then spell VACATION for a chance at an extra ball.

As a home-use game, Vacation America features several technical innovations to reduce costs and improve reliability. The playfield hardware is mounted on three large circuit boards to reduce wiring and labor, conventional rollover switches are replaced with maintenance-free infrared optical switches, and most components can be replaced by removing not more than four screws and a plug. Servicing requires no more skill than installing a sound card into a personal computer, settings are accessible without opening the game, and the narrow cabinet easily fits through doorways.

Unfortunately, the only thing easier than maintaining Vacation America is actually playing it. Although the playfield has some moderately challenging shots, the extremely simple rules and basic layout quickly bored most players. The game only supports one player and doesn't keep track of high scores, removing any sense of competition, and it's far too easy to repeatedly earn extra balls and keep playing indefinitely.

Among pinheads, Vacation America has become a game of legendary awfulness and derision, and has the ignoble distinction of being the lowest-rated game on the Internet Pinball Database. With a retail price of $3,000, only around five hundred machines were sold.