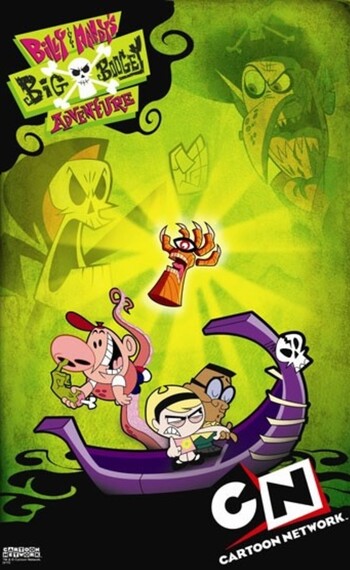 “In the Land of the Dead, heck, boy, ain't it grand? I’m Overlord of the Underworld, ‘cause I hold Horror’s Hand!”
Advertisement:

Billy & Mandy's Big Boogey Adventure is a 2007 made-for-television animated adventure fantasy comedy film produced by Cartoon Network, and is the first made-for-television film based on the animated series The Grim Adventures of Billy & Mandy, the second being Billy & Mandy: Wrath of the Spider Queen. Big Boogey Adventure premiered in the United States on March 30, 2007, and in the UK on February 14, 2007, and was released on DVD in the U.S. on April 3, 2007.

The events of the film take place during the sixth and final season of The Grim Adventures of Billy & Mandy.

It's Billy, Mandy and Grim versus the Boogeyman in an epic tale of monster pirates, futuristic robots, evil artifacts, and snot. When the Underworld strips Grim of his powers (due to years of Billy and Mandy abusing them), Billy, Mandy, Grim and Irwin must race the Boogeyman and a crew of monster pirates to capture Horror's Hand, a powerful artifact capable of making whoever wields it into the scariest being alive.

Boogey goes through the mother of all humiliation congas.

Boogey goes through the mother of all humiliation congas.