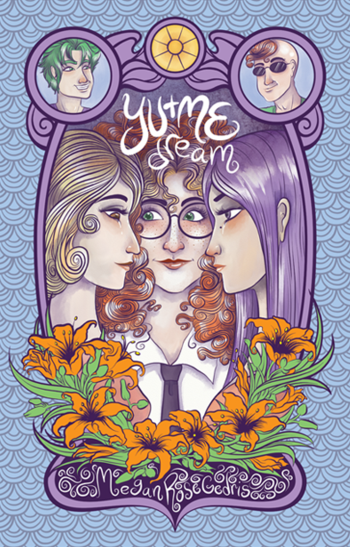 is a webcomic by Megan Rose Gedris. It concluded in 2010.

just to be on the safe side. The normal text/hidden text ratio on this whole article really says everything; it may start slow, but then WHAM! Spoilers that nobody dares give away.

Things just aren't going well for Fiona. She has a dead mom, a father who is always on business, a Wicked Stepmother, no friends at the Catholic high school, and none of the nuns believe that she's being picked on by Sarah and Cass. So she begins to not pay any attention to anything around her, instead living in her own head in vivid, lucid dreams.

But then Lia moves in next door and real life seems more interesting with her around. Fiona gains another friend in Jake, a green haired boy she saves from a bunch of bullies who attack him for being gay. Fiona is drawn to him, intrigued by this thing known as "gay". She begins to look at Lia in a whole new light. But what will Lia think of it?

Up until the end of issue 9, readers thought this was a case of lesbians living in Teen Drama. Issue 9 dropped a TON of drama bombs.

1. Sarah kisses Fiona/Cass walks in and gets jealous
2. Fiona gets grounded for admitting to being a lesbian and can't go to the prom.
3. Fiona meets her gay godfather, Richard who her parents have been keeping from her.
4. Richard tells Fiona some pretty major things about her family that she didn't know/had amnesia about, such as the fact that her mother committed suicide by getting into a car accident with little Fiona in the car because her father was cheating, with the Wicked Stepmother
5. Fiona decides to go prom and her parental units do not stop her due to #4.
6. Fiona faints.
7. James has an announcement to make: Sadako is his new girlfriend.
8. Fiona faints again and wakes to Sadako and Lia fighting.
9. The Big One. At Fiona's questioning of what's going on, Sadako, Lia, and Don tell her that everything up until this point was All Just a Dream and Lia, Jake, Don, etc have all been actors, though Lia gets in that her feelings for Fiona were real.
10. Fiona wakes up from a coma, that we find out she caused by trying to commit suicide upon learning that her own mother tried to kill her.

Part Two begins with more of an explanation and then Fiona finds a way back to Dream Land to search for Lia.