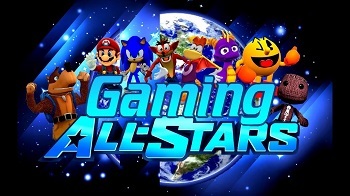 In a World… where hundreds of characters from dozens of video game franchises coexist, evil abounds, and the malevolent souls all seem to crave one thing: trophies, hapless characters who, upon dying, turn into figurines that can be collected, but can be resurrected if given a hard tap (Just like in The Subspace Emissary). To them, it's an insignia of dominance and power, a de-facto currency of bad-guy bragging rights. Too bad it isn’t that simple, as baddies compete brutally with each other, and the goody two-shoes attempt to dispatch them.

Produced from 2012 to 2013 and released in May 2013 by Gamingallstarsgmod (Formerly Supersmashbrosgmod), Gaming All Stars: The Ultimate Crossover could easily be the most elaborate instance of Garry's Mod in existence, consisting of roughly 4 hours’ worth of story, split up in three giant chunks. About a year later, he decided to give the series a new coat of paint, releasing it as an episode-based animation titled Gaming All Stars Remastered. After he finished that in 2016, he began working on Gaming All Stars 2, with even higher quality animation and more well-defined storylines than Remastered. Alas, the creator suffered a dreadful arm injury in late 2019, forcing GAS 2 and his other projects (Funny Game Moments, Nintendo Chronicles) to undergo significantly longer upload delays.

For context, the series begins with Mario dealing with King Bowser and his goons as usual; after getting separated from his friends, however, the bigger picture is gradually revealed, with him and many others teaming up with or fighting against characters from a bevy of gaming walks of life. Sonic and Alex Mercer vs Porky Minch? Check. Crash and Spyro vs Shadow Mario? Check. Mario, The Heavy, and John Marston vs the Babylon Rogues? Checkaroo!

Gaming All Stars: The Ultimate Crossover can be viewed here

. Meanwhile, the movie version of Remastered can be viewed here

, or, if one wants to view the series episode-wise, here

. The first episode of 2 can be viewed here

Tropes included in all iterations of the franchise:

Tropes specific to Gaming All Stars: The Ultimate Crossover

Tropes specific to Gaming All Stars 2