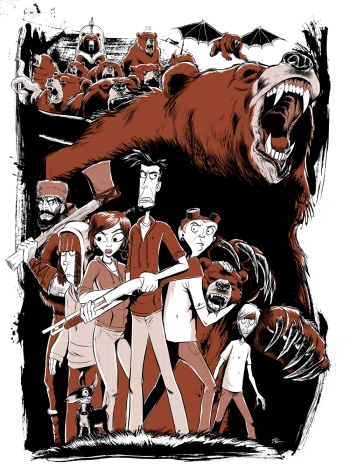 "There is no safety. There is no calm. Things will not go back to normal. Every damn bear on this earth has decided to kill every damn human. That's what's going on."
— Dickinson Killdeer

is a comic by Ethan Nicolle, the creator of Axe Cop.

It begins with workers hoisting a dead animal out of a sewer — it looks like a bear, but most bears do not have tentacles. The only explanation is the work of a Dr. Wilson Medved, but he's dead and it's been almost thirty years since he was shut down.

Then we meet Joel, average slacker working in an electronics store. After some disagreements with his uptight boss, then with his father over rent, he quits his job to go live in the woods at the suggestion of his stoner friends. But what they find in the woods is far from the natural peace and beauty they expected. Instead, they find packs of grizzly bears that seem to have one goal: kill every human they find. After several narrow escapes with the assistance of wild hunter and expert bear-killer Dickinson Killdeer, they find that this is not an isolated incident. Bears have waged war against mankind, and it looks like only one species will come out of this alive.

Bearmageddon is not for the faint of heart. Don't read this comic unless you can stomach seeing lots of people getting mauled to death by bears and, conversely, seeing lots of bears getting shot, stabbed, and axed to death by humans. If that's exactly what you're looking for in a webcomic, then look no further.