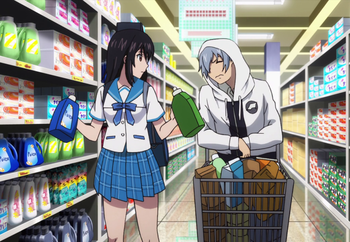 Sooner or later, it's time for the family to go to the grocery store to get what they need. Sometimes one character will want to prove to the others that they can be responsible and assist them in their shopping, often so they can get something they want along with their groceries. In works involving little kids in particular, said little kids will often want their parents to buy them toys or treats, regardless of how well-behaved they've been. Often, these little kids will wander off on their own, looking for toys or treats themselves, and making a mess of the store along the way, intentional or not. May occasionally see their teachers and/or their archnemeses on the way. Whatever the situation, hilarity usually ensues.