Teachers Out of School 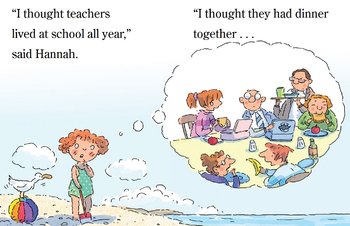 Ah, the innocence of youth...
"Spinelli's story could be true, I mean, teachers ARE human, therefore logically they must eat, sleep, and presumably shop."
— Gretchen, Recess
Advertisement:

From the beginning of elementary all the way up until the end of high school, kids spend a large part of their day (usually around six to eight hours) in/at school, under the tutelage of a teacher of some kind. The class tends to develop a relationship with their teacher, but they typically never see their teacher as anything more than just their teacher.

At the end of the day, kids go home. Do teachers go home? Of course not! Teachers are teachers. School is their home! After all, they're already at school when the students arrive and are still there after the students leave, so they obviously must never leave the building themselves. At the end of the day, teachers just get switched off and locked in a storage closet. Or they spend their summers sleeping in their vampire coffins until vacation is over, where they will rise up to suck the life out of their students the next year.

With this thought in mind, it often comes as major shock when the kids see their teacher outside of school—such as at home, at a grocery store, or even out on a date. For most students, it's hard for them to think of their teachers actually having lives outside of their jobs, unless they're taking a break in the Mysterious Teacher's Lounge, where who knows what amazing and/or secret things teachers are doing in there. Other than brainstorming new ways to make students' lives miserable, of course.

There is also some element of Contractual Purity involved, as to quote the Teachers article, "one of the first things that Education programs drill into you is never to be seen doing things that your students aren't old enough to do (with the possible exception of driving a car), for fear that it may affect your credibility as an authority figure."

Compare Parents as People, and Villains Out Shopping for when antagonists are encountered on unexpected mundane excursions. If the students are out of school, see Shouldn't We Be In School Right Now?. If the teacher still acts like a teacher when school is out, the teacher is a Non-Giving-Up School Guy. If the teacher is a student's relative, see Embarrassing Relative Teacher.

This trope is about the myopic perspective of the teacher's students who don't realize that their teachers have lives outside of their jobs.

"Just a Teacher Out of School"

In "Back to School (Operetta)," the kids of "Pete the Cat" are shocked to discover their teacher from the previous year, Mrs. Burrow, out shopping in the Mega Mart. It becomes the subject of a song number.

"Just a Teacher Out of School"

In "Back to School (Operetta)," the kids of "Pete the Cat" are shocked to discover their teacher from the previous year, Mrs. Burrow, out shopping in the Mega Mart. It becomes the subject of a song number.