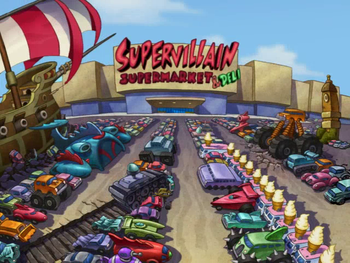 A subsidiary of Trope Co. where you'll find all the Villains Out Shopping.

Here, you can find all of the delightfully vile tools you could ever need as a Big Bad. Need a Death Trap? We carry them all, from Acid Pools to Trap Doors! Looking to make your Mooks more reliable? You can trade in the standard issue variety for top-of-the-line Evil, Inc. Mecha-Mooks! Want to build a new Super Villain Lair or Den of Iniquity? We offer not only the materials, but some of the finest dark and foreboding real estate around! Anything and everything you need for your Evil Plan is available and affordably priced.

So, what will it be today?

Not to be confused with Predatory Business, which is about corporations that are seen as evil due to unsavory business practices.