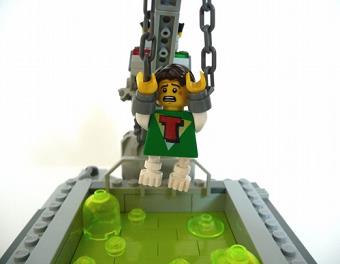 Become part of the solution!
"You swim in that, you'll be the soup in no time flat! Boneless, too!"
— Yomi, Terranigma
Advertisement:

The pool filled with Hollywood Acid is the go-to Death Trap for any Mad Scientist that doesn't have access to a Lava Pit - usually bubbling a sickly green color, it will melt the flesh off your bones and leave nothing but a bleached skeleton, if that. Can be used both for moats near precarious bridges and lowering heroes into. Acid pools are generally treated as green variants of the Lava Pit and used in a similar manner as obstacles or execution methods.

Highly impractical in Real Life due to the nature of acid, particularly if bubbling. Acid is often produced when highly corrosive positive ions are dissolved in water, and they are quite capable of escaping, particularly if in high enough concentrations as to remove flesh from the bone. These remain corrosive and are quite likely to harm anyone nearby, almost like a chemical variant of Convection Schmonvection.

Strong acid is also extremely poisonous to breathe, so the air would be fatal long before its first victim could fall into it, unless it was from a substantial height; and even then it would have a substantial stench even from a great distance, which would drive anyone away if they had a choice.

The counterpart on the opposite end of the pH scale is the pool of lye, which shows up typically in industrial vat form.

May overlap in video games with Grimy Water. See also Shark Pool. Not to be confused with the band Acid Bath.