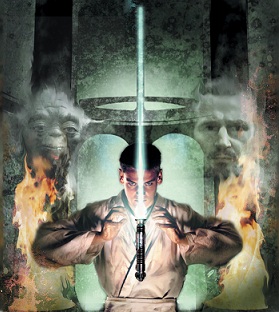 Peace over anger
Honor over hate
Strength over fear
Advertisement:

Part of the deluge of new EU material resulting from the massive renewed interest in Star Wars after the release of Episode I, Jedi Apprentice is a series of Star Wars Legends books written for young adults by Jude Watson. Basically an extended prequel to The Phantom Menace (yes, a prequel to the prequel), it follows the adventures of Qui-Gon Jinn and his young apprentice Obi-Wan Kenobi.

Although some of the books are stand-alone adventures, most of the series is told in story arcs that are at least three books long. The first arc, about Qui-Gon's old apprentice and enemy, doesn't end until the eighth book (within it is Obi-Wan leaving and returning to the Jedi, which lasts four books).

There were eighteen books in total and two Special Edition books that crossed over with the Jedi Quest series (which was also written by Watson).