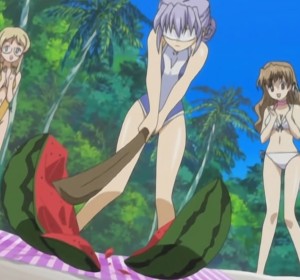 Hazuki hits it in one.
Advertisement:

Suikawari in Japanese. A party game, usually in the Beach Episode of Japanese media, where someone is blindfolded, given a large stick (possibly a bokken or wooden sword), and directed to smash/crack a watermelon.

Similar to hitting a piñata

in some Western cultures, except without any goodies other than sandy watermelon.

One of the traditional summer beach activities in Japan, at least until environmental and economic concerns made it rather less popular.

Not to be confused with the band The Smashing Pumpkins — but it is the stunt that dead-ended Gallagher's comedy career.