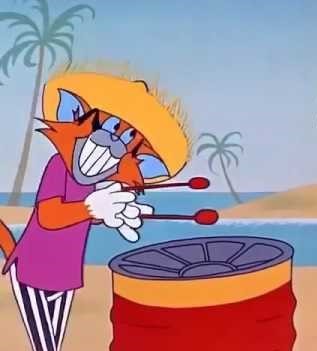 Oh, to be a grinning cat playing the steel drum on a tropical island.
Advertisement:

, more commonly known as the steel drum, is a percussion instrument originating from Trinidad & Tobago. The steel drum is just that - a steel drum with an open lid, with multiple concaves that the pannist (the name for a steelpan/steel drum player) hits with mallets to play notes.

The steel drum is commonly used to play catchy and fun tunes in real life, particularly in the calypso

style, and that often translates into fiction. Steel drums will often be used for upbeat background music.

Since the steel drum comes from the Caribbean islands, it is often associated with tropical places. Because of that, in fiction, you're likely to hear steel drums in island, jungle, ocean, and especially beach settings. This means that in video games, they'll likely be used in Palmtree Panic and Under the Sea levels.