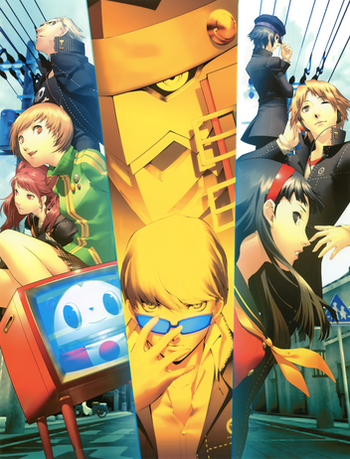 We're all trapped in a maze of relationships.note Clockwise from the bottom-left: Teddie, Rise, Chie, Kanji, Izanagi, Naoto, Yosuke, Yukiko, and Yu.
Life is truth, and never a dream...
All souls know this from birth...
The truth is something that is chosen and grasped...
Something discovered with one's vision and will.
Only by gaining that does the seeker become truth himself,
a cord that connects past and future.
— Igor, Master of the Velvet Room
Advertisement:

Persona 4 is an Urban Fantasy Role-Playing Game, and the fourth numbered sequel in the Shin Megami Tensei JRPG franchise's Persona sub-series, developed by Atlus for the PlayStation 2 and later the PlayStation Vita and PC. It released in Japan on July 10th, 2008, in North America on December 9th, and in Europe on March 13th, 2009. In April 2014, the original game has been available for download on the Play Station Network for PlayStation 3.

You are an Ordinary High-School Student, staying with relatives in the rural town of Inaba for a year while your parents are working abroad. Soon after you settle in with your uncle and young cousin, a series of impossible murders begin to rock the sleepy town: victims who suddenly disappear, only for their bodies to be found hanging upside down from telephone poles with no obvious cause of death. All while the sleepy town is undergoing a massive upheaval when a respected politician undergoes a messy divorce and the small town's bonds are being eroded by the presence of bigger businesses, causing distrust in the town.

Example of:
The Hyena