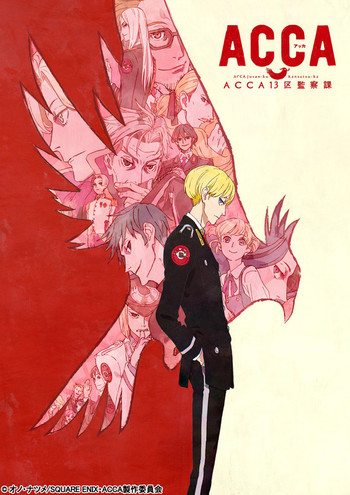 A manga by Natsume Ono, which ran from 2013 to 2016 in Monthly Big Gangan. It was adapted into a Winter 2017 anime produced by Madhouse.

In the Kingdom of Dowa, there exists an organization called Acca, which provides services to each of the 13 distinct districts of the kingdom. Acca is independent from the crown, and from each district's leadership, yet there is always a power struggle between these sides - and other interests that want to affect the kingdom. Jean Otus is the deputy chief of Acca Headquarters' Inspection Department. His job is to go to all of the Acca branches in all of the districts and audit them, to weed out corruption.

It is the 100th year since the struggles that led to the creation of Acca. The king is getting old, the heir apparent seems incompetent, and there are rumors swirling everywhere about a possible coup d'etat - and Jean finds himself at the center of those rumors. What is really going on? Who is planning what? And what will happen in the future of Acca?

And there's bread. Lots of bread. And cake.

Can be viewed on Crunchyroll. Funimation is dubbing the series as part of its "Simuldub" season.