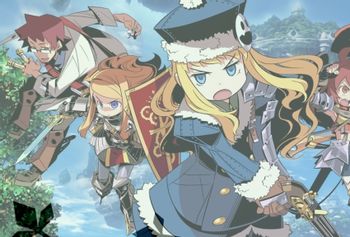 Etrian Odysseynote known in Japan as Sekaiju no Meikyuu (世界樹の迷宮, literally "Labyrinth of the World Tree") is a first-person tile-based dungeon-crawler series published by Atlus and co-developed with Lancarse, consisting of six major installments, remakes of the first two games, and two Mystery Dungeon spin-off games.

The series' most iconic feature is the in-game cartography system. The player is given a blank grid every time they enter a new area and must chart out their own map. The system is meant to recall retro games, where players had to map out their own progress while playing. Thankfully, the whole point is that the game doesn't force you to break out your own graph paper: you draw your maps on the (3)DS' bottom screen and mark interesting locations with a variety of icons.

Also iconic are the infamous "F.O.E.s" (Formido Oppugnatura Exsequens or, in the Japanese version, Field-On Enemy) — ridiculously overpowered Pre Existing Encounters that roam the dungeons. If the player collides with an F.O.E., combat begins with a monster that is usually immensely more powerful than everything else on the level, and meant to be avoided until the player is much stronger. When there's a message to the effect of "you suddenly sense the presence of a powerful monster that will eat your face, maybe you should run," Etrian Odyssey means it. It's worth noting that each round of combat counts as a step for F.O.E. movement, so taking too long will allow them to sneak up on you and join in the fight. All of this is on top of the already significant difficulty of the rest of the game.

According to the series' original scenario designer, Shigeo Komori, the series was inspired by retro dungeon crawler games, specifically Dungeon Master. He lamented that no one made games like that anymore, and designed Etrian Odyssey in the hopes that it would catch enough interest to revive the genre. While the series wasn't an overnight success, the first game managed enough sales to warrant a sequel and by the time Etrian Odyssey IV rolled around, its first week sales in Japan pulled over 100,000 units. The series has become a sort of cult hit internationally, and is definitely one of Atlus' staple franchises at this point - to the point that two Etrian-mechanics-inspired Persona games, featuring the casts of the modern Persona games, were released in 2014 and 2018 (staggered worldwide, to boot). The series also has two themed crossover games within Spike Chunsoft's Roguelike Mysterious Dungeon note Fushigi no Dungeon franchise released in 2015 and 2017.

The series has a character page that could use some work.

For similar games to compare and contrast, see the Ur-Example, Wizardry, and/or the main-series Shin Megami Tensei games, including the spinoff Shin Megami Tensei: Strange Journey. Also compare Persona Q: Shadow of the Labyrinth and Persona Q2: New Cinema Labyrinth, which are essentially Etrian games with a Persona spin on the visuals, settings and a few mechanics.

Atlus has stated that Nexus is the final 3DS game in the series but that they have future plans for the series.

open/close all folders
#-C
D-F
G-J
K-M
N-P
Q-T
U-Z
The tropers have fallen...
Game Over
Save your page progress?