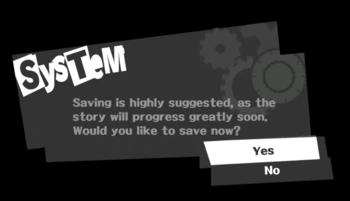 Eh. Probably means nothing.
Careful. This is the last haven you'll find here. Beyond, there is no light to protect you.
— Kingdom Hearts, right before the Final Boss
Advertisement:

So you're playing a game and you reach a critical point in the story. Something bad happened, and things got worse. Maybe the hero just took a No-Holds-Barred Beatdown from the Big Bad, or maybe the world has sustained massive damage. Perhaps the time has come to take immediate action to stop the big bad from carrying out his plot.

Alternatively, there is a lull in the story (or Exposition Bomb), or another incongruous moment, like after a conversation, when things are about to get worse.

This is the Ominous Save Prompt, and it often looks or works different from an ordinary save prompt.

Often used in a Downplayed manner: a character says that the game should be saved, (e.g. "We need to double check our equipment" along with a "Ready to go?" prompt) but the player must still call up the save menu normally.

Subtrope of Suspicious Videogame Generosity, in this case letting you know you should save before (and/or after) the rough patch. The Strict class of Points of No Return often makes use of this. For most games where saves are usually automatic or handled by checkpoints, the appearance of any save prompt qualifies as Ominous. Some may even opt to create a new save file for a quick and easy failsafe for Save Scumming.

Would you like to save before reading the Examples? You really should.

Right when Ellen's ruined body starts stumbling towards you, the game prompts you to save even though the cat's dead body (your save station) was right outside the door. After the save point, you probably will die a lot.

Right when Ellen's ruined body starts stumbling towards you, the game prompts you to save even though the cat's dead body (your save station) was right outside the door. After the save point, you probably will die a lot.